“A word in earnest is as good as a speech.”

Hello and welcome. I’m a Yorkshire-based writer, illustrator, script developer and teacher.  I’ve been lucky enough to receive a good education and publicly-funded healthcare, and I wish everyone on the planet could have these things.  I grew up on the coast of West Wales but I now live in the Holme Valley with my family and two cats.

My areas of specialist knowledge and practice are young adult and children’s fiction and screenwriting.  I have a wider interest in botanical painting and poetry.

I’m currently undertaking a PhD in Creative Writing at the Manchester Writing School, which makes me feel very lucky but also a little weird… as I haven’t been a student for about a gazillion years.

What do I love?

Writing and painting, obviously!  And in so many forms.  However, epistolary fiction (letters and diaries), and other narratives written via or alongside objects from the world of the story hold a special fascination for me.  I think this is probably because as a child, I loved anything which made magical tales more credible.

If you’re wondering what I mean by this, a children’s book by Janet and Allan Ahlberg is a good example.  It’s called The Jolly Postman and in it you can read all the correspondence the postman delivers to the magical population of a fairytale world.  By containing objects from the story as well as being the story itself, the book deliberately blurs the lines between reality and the fictional realm.  Lady Cottington’s Pressed Fairy Book is another creation where the book is actually part of the make-believe, and gives our  imaginations a richer experience because of it.  Well, as long as you don’t mind the idea of a few squashed fairies!  I’m a big fan of both of these books. 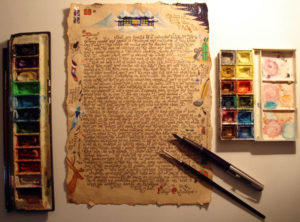 For my own part, I spent many years making and selling Father Christmas letters, which I worked hard to make seem like they really had come from the North Pole.  I would personalise them for each child in Santa’s curly writing, then print them, and pack them into hand-decorated envelopes.  The most important element, however, wasn’t the personalisation, but the tone.  I laboured to make every letter sound warm and magical, as though Father Christmas was sharing the idiosyncratic events that had been happening at his house with a friend.  To add to that home-made feel, I painted little illustrations all around the margins of his letters, and intermingled them with his words. 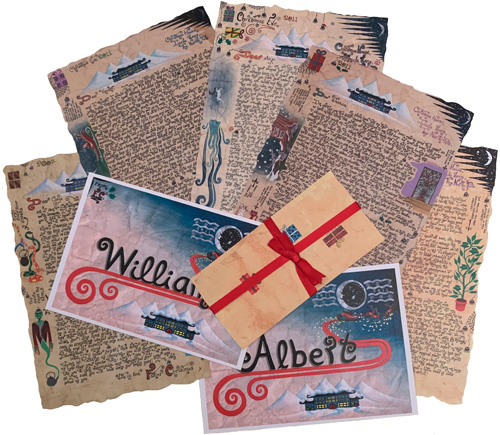 Online, I’m still best known as the writer/illustrator of these Father Christmas letters.  My letters have sold as hard copy in their thousands and been downloaded free in their hundreds of thousands. To date, I have created over fifty of them – all handwritten, illustrated in watercolour and telling a different Christmas story.  I don’t sell them as physical products any more because the income from them was seasonal but still required a big time commitment in November/December, which meant I had trouble making ends meet the rest of the year.  I was very sad to draw a line under selling the letters as physical products, and I still miss helping to personalise and send them out every year.  To all who purchased a letter Rooftop Post in the past, thank you.  It was my pleasure to help create something special for your child.

Although I no longer sell Father Christmas letters, I continue to provide some free copies parents can print for their children at Rooftop Post.  I do this because having been brought up by a single Mum, I know that Christmas can be an expensive and difficult time for parents, and I wanted to provide a bit of magic for free.  I try to add at least one new free letter every year.

As any of my past students who happen upon this site will know, I have also spent several years teaching.  (If you are a past student, my very best wishes to you and I really hope you’re happy and doing well.  If not, don’t lose heart, especially if you’re trying to be a writer.  It’s a difficult road and there are ups and downs for all of us.  The trick is to recognise when you’re having a rough time, do what you can to look after yourself and know that eventually, things will change again.)  In October 2018 I embarked on a PhD, so I’m not teaching right now, but I have every intention of returning to the classroom as soon as time and opportunity allows.

My PhD research is about how fathers are portrayed in children’s and young adult literature.  Not all fathers – because that would make my project unmanageably large – but single-parent fathers who are bringing up children on their own.  I’m using my creative writing skills to figure out some of the ways we might think about these types of characters as we create them, and how that fits in with what other authors have done.  For example, I’m interested in the idea of subverting paternal archetypes, that’s to say turning father figures into something different, (and if I’m lucky more honest!), instead of just replicating the types of characters we normally come across. I’m looking at portrayals of mothers too, and how they differ from the way we see fathers represented.

Of course, when you do a PhD, you often start with one thing and end up somewhere quite unexpected.  This is definitely happening to me because along with the areas of research I’ve told you about above, I’ve ended up looking at dads who are depicted as transhuman and posthuman.  These types of portrayals raise all sorts of interesting questions as to how we think about fathers now and how we hope to think about them in the future.  Which in turn, tells us how we think about ourselves.

Other Bits and Pieces

Beyond all that, I have a broad portfolio which includes greetings cards designs and other artworks for various individuals and firms, several co-authored screenplays which have placed well in international screenwriting competitions, and three short ebooks for children, including the rhyming Christmas picture book, Santa’s Cat.  That’s about all I can think of to say here.  So thanks for your interest and for popping by.